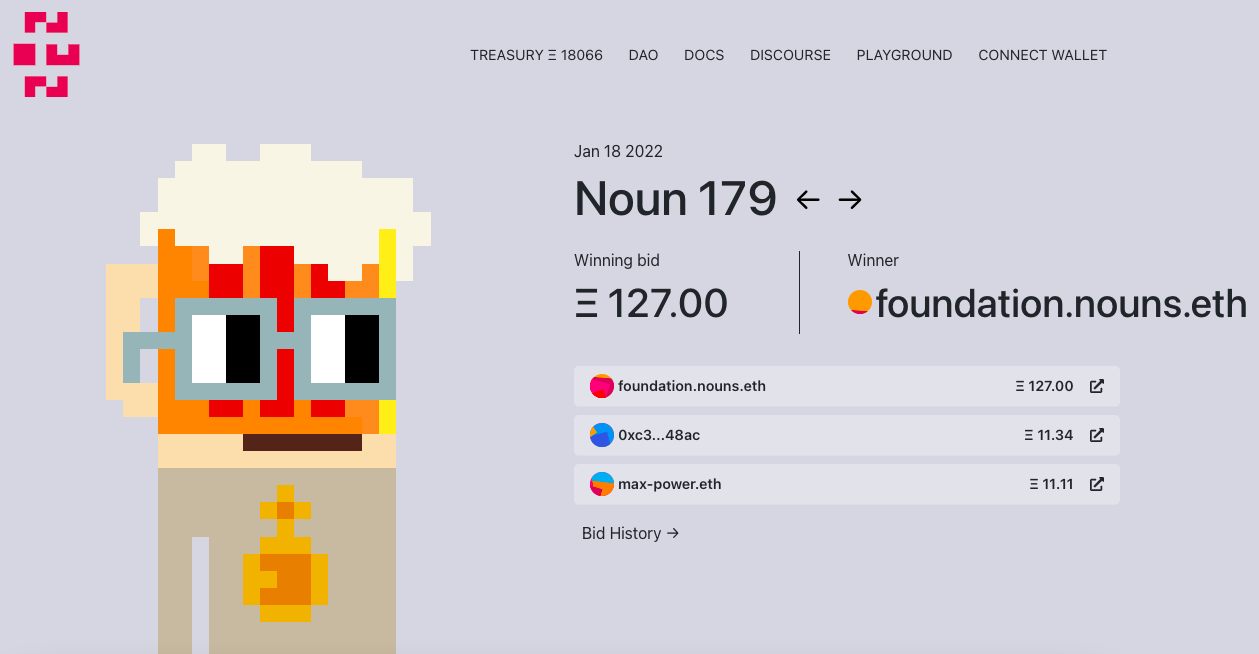 While there have been a number of cringeworthy moments in brands’ recent attempts to enter the NFT world, one company is laying the foundation to enter web3 in a thoughtful and novel way: Anheuser Busch. This effort launched with an announcement that the popular press still hasn’t picked up: Bud Light is airing a Super Bowl commercial that will prominently feature the Nouns project. This will be a major moment for mainstreaming the general population into the web3/NFT world. But this wasn’t a half-baked strategy—the company has been laying the groundwork in a clever way since the summer.

First, the brand collected the different rocket pieces featuring the Budweiser logo from the Tom Sachs Rocket Factory and assembled them into a completed rocket. This cost the brand $25,000, but that price was well worth the marketing buzz the company generated when it updated its social media profile picture (PFP) to feature the completed rocket.

Budweiser’s “launch” into the NFT space with the Tom Sachs Rocket Factory piece coincided with their purchase of the Ethereum Name Service (ENS) name of beer.eth. For those not in the crypto/NFT landscape, securing a vanity ENS name in web3 is akin to a landing a coveted dot com address in the late 90s. Just like an easy-to-type domain address, the ENS resolves to a numerical IP address, helping to more easily route a person to the Ethereum wallet rather than the string of digits (such as 0x39DBfDD63FD491A228A5b601e0662a4014540347). Purchasing the address for 30 Ethereum ($95,000 at the time) meant that Budweiser laid claim to the ENS domain for beer enthusiasts. Budweiser then changed their social media profile to say “beer.eth” rather than “Budweiser,” employing a standard practice for those in the web3 space.

Next, rather than attempting to enter the space with their own NFT project right away, the team at Budweiser and Anheuser Busch became embedded in the space over the course of the next three months. They listened, observed and engaged prior to launching the NFT project called Budverse cans, a series of 1936 generative art pieces featuring beer can designs from throughout the company’s history on top of varying backgrounds and with different koozies. The company also announced that the NFT would provide access to the forthcoming Budverse and unlock other opportunities for holders (such as the soon-to-launch Bud Royals NFT that’s promoting 22 rising musicians).

But the most interesting feature—compelling to normies (read: normal people) and aggravating to web3 degens (an affectionate term for those knee-deep in the space)—was that the Budverse can NFTs were available to purchase via a web2 portal with fiat. This strategy, which distinguished Budweiser’s project from the web3 blind mint that elicits gas wars and caters to NFT pros, was designed to enable as many normies to get a Budweiser NFT as possible.

To attain a Budweiser NFT, a customer had to go to the Budweiser NFT site (which saw incredible web traffic and was sporadically offline), browse the entire selection of 1,936 NFTS, and select their desired item. The person would then add the NFT to their shopping cart, much like they would any physical item in an ecommerce store, and then check out with a credit card at a cost of $499/NFT + a flat $75 gas fee (they also allowed Ethereum using the Coinbase wallet). Budweiser then emailed a claim link through which the purchaser could provide an Ethereum wallet for the NFT to be transferred into.

While this process was kludgy for web3 natives, it provided an easy on-ramp for the population at large. Not requiring Ethereum or a crypto wallet at the time of purchase will be crucial as we onboard the next 10 to 100 million users to this space. (The redemption link actually walked the person through how to get a wallet!) Budweiser and Anheuser Busch proved themselves to be leaders in this process, but hopefully we will see it improve for all customers over time as well.

Bud Light Gets a Noun, Will Feature it in a Super Bowl Commercial

All these efforts have led up to what will be one of the biggest moments in the mainstreaming of NFTs to a broad audience: a Super Bowl commercial featuring a Noun NFT. To understand the importance of this development, you first have to understand what the Nouns project is.

The Nouns.wtf project launched on August 30, 2021 with the aim of generatively producing one Noun a day, forever. As opposed to most collections that launch with a set amount of NFTs, the Nouns project is a slow drip. And purchasing a Noun grants the owner access to the DAO (distributed autonomous organization) and voting rights on how to spend the money in the treasury from sold Nouns. This can be to fund anything under the sun, from nonprofit organizations to projects that promote Nouns to the general public. Currently the treasury sits at 17,963 Ethereum (approximately $58M).

The Nouns project was also one of the earliest projects to license its NFTs and artwork in the public domain with the CC0 license. This means that anyone can use the artwork in the future, for any personal or commercial purpose. While there have been blatant rip-offs of the projects (GOOP TROOP and HEAD DAO come to mind), what has proliferated more widely across the medium are the instantly recognizable square Nouns glasses.

These glasses have popped up as an attribute in mainstream projects, such as Cryptoadz by Gremplin, one of the pixel artists on the Nouns project, and Chain Runners. They also show up in the beloved derivative project Noadz, where the artist Ser Noadz combines Nouns heads with Toadz bodies. The glasses have become what David Horvath, tapped by the Nouns Foundation to lead the Nouns Studio, calls the “Nike swoosh of web3” (a sentiment I understand but somewhat disagree with—more on that in a future post).

At any rate, the Nouns project—and specifically the Nouns glasses—have become an instantly recognizable calling card of NFTs and web3 at large. The team at Budweiser has done their research, recognized this and made an incredible trade with the Nouns Foundation: a beer Noun NFT in exchange for featuring the Nouns project in a Super Bowl spot.

It started with Proposal 33 on the Nouns website: Feature Noun glasses in a Super Bowl commercial and on real beverage cans. The proposal detailed the following requirements for Budweiser in exchange for a Noun NFT:

On January 18, Bud Light tweeted “We’ve got something brewing” and provided a link to their Discord to encourage fans to “get ready for what’s next!”

On January 19, Bud Light tweeted a clinking beer emoji and the ascii art for the iconic Nouns glasses and changed their profile picture to the Noun #179, the beer Noun that the Nouns Foundation had recently transferred.

Linking this announcement back to the proposal in the Nouns Foundation vote #33, we can only assume that Bud Light will be featuring the Nouns glasses in a Super Bowl commercial this year.

This is MASSIVE for the NFT space and for providing an on-ramp for the general population. And I can’t think of a better project for Budweiser and Anheuser Busch to promote. As we rapidly onboard more people to the web3 space, it is paramount to consider some of the structures that underpin this movement. And central to this is to shift our mindset on intellectual property.

The thesis of many builders in web3 is that art, music, photography, cinema and more should be placed in the public domain with the CC0 license. This allows other creators to develop their own projects using elements from works they love without fear of reproach. The idea is that all derivative works of a project will consequently drive back value to the original, creating value both for the original holders as well as those owning a derivative. This radically different approach to IP has already yielded some early successes.

I recently wrote about Flipmap, a CC0 derivative of Blitmap, which blew up in the New Year. Not only did it result in a huge chunk of Ethereum for the developers When Lambo and Sara Sioux, it also helped educate a completely new subset of people about the Blitmap project. Prior to Flipmap, many were unaware of Blitmap, as well as the significance of on-chain art and the CC0 license.

Then you have Noadz, the previously mentioned derivative that combines Nouns glasses with Toadz. The creator, Ser Noadz, has developed a unique universe of Noadz as well as crafting tremendous narratives and features that can “modify” a Noadz. Through these efforts, the artist was recently able to acquire a Cryptoadz NFT. This is a perfect example of how a derivative doesn’t dilute the value of the original; if anything, it creates more awareness of the original and a presents a path to acquiring it.

Win-Win-Win for Budweiser, the NFT Community and CC0

Clearly, as NFT artist Figure31 tweeted, the team at Budweiser took the old maxim of DYOR (do your own research) seriously. They thoughtfully engaged with the space, entered it with their own project and opted in to support one of the crown jewels in Nouns. Aligning with the modern ethos of CC0, they are supporting the underpinning infrastructure with ENS. In short, this move has been strategic and profound rather than a short-term cash grab.

Not only am I excited to see the Bud Light/Nouns Super Bowl commercial, I’m looking forward to seeing the reaction of people who are unfamiliar with the space and finding out what the team at Anheuser Busch does next. Heck, maybe they will sponsor my Bored Ape Yacht Club member #2207 in his next animated video with a little product placement—I think that Papa would enjoy drinking the King of Beers.