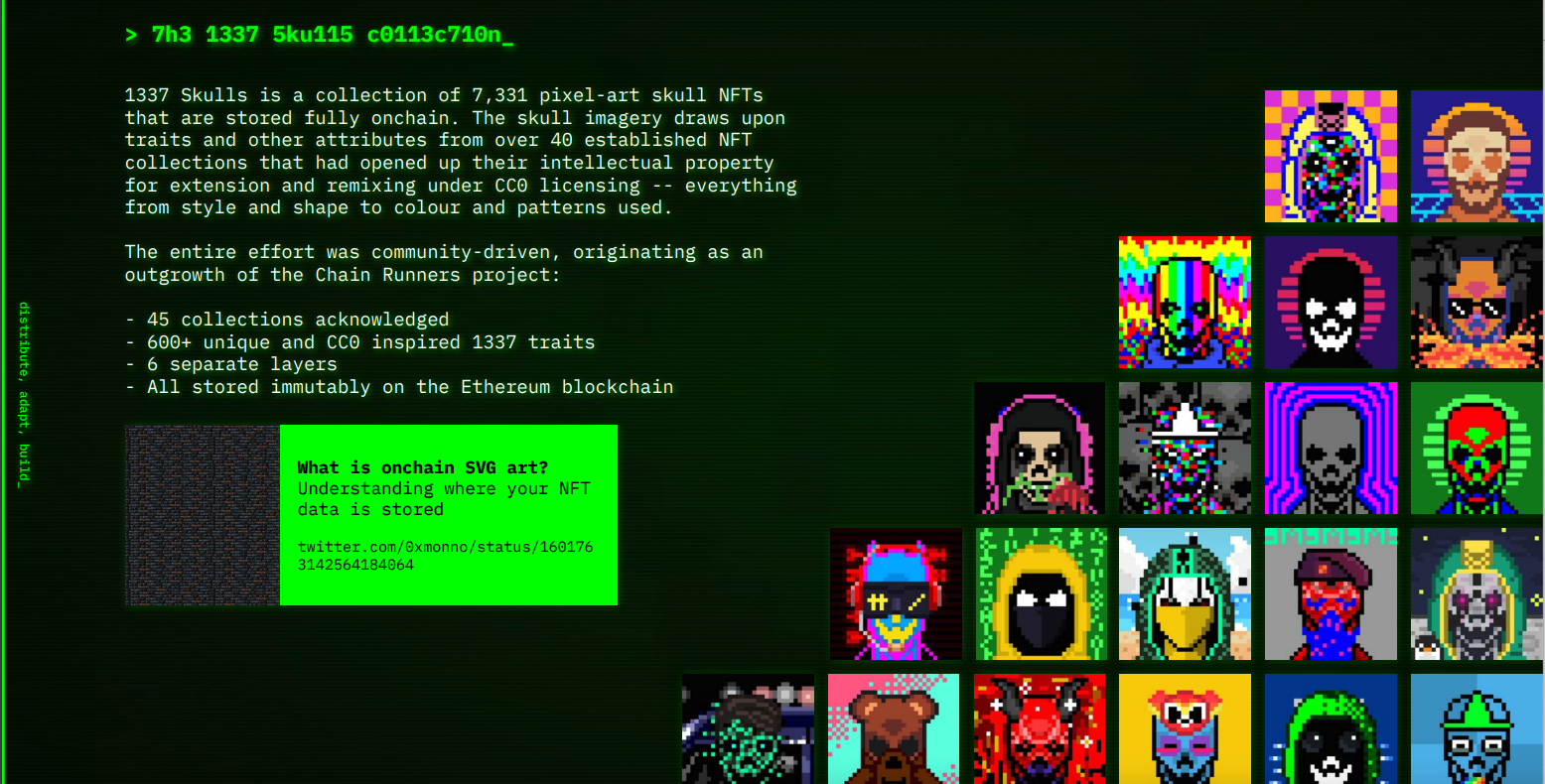 I always hate the familiar valedictorian speech trope where the speaker starts with a definition. However, I feel that when we talk about derivative projects, very few of us have taken the time to examine what the word ‘derivative’ actually means. So indulge me, if you will anon, and allow me to put forth this trope to start this post with a reading from Merriam Webster on the definition of ‘derivative’ when it is used as an adjective:

linguistics 1: formed from another word or base : formed by derivation

2: having parts that originate from another source : made up of or marked by derived elements

The interesting thing about language is the nuanced timbre that is associated with words, and in this case, it seems clear that ‘derivative’ has a negative connotation. Almost as though it is something less than the original. But this tone changes when you look at the definition of ‘derive,’ the verb form of ‘derivative,’ which the dictionary defines as ‘to have or take origin.’ This is a far more optimistic tone for the word.

This pedantic examination of the word ‘derivative’ was done just to say that the 1337 Skulls project, a derivative of the CC0 NFT project Chain Runners, is not typical of a derivative project. While it is built on the foundation of the popular on-chain public domain project, the 1337 Skulls project is anything but a banal interpretation of Chain Runners. In fact, the skulls have created a new standard of quality for what it means to be derived from an original project. There were a few key things that the 1337 Skulls team did to make their project unique, and at the time of publication, have a higher floor than the core collection. Let’s take a look.

The Evolution of the 1337 Skulls Collection: From Desired Trait to Community Standard

Flashrekt was always active in the Chain Runners Discord, interacting with community members and sharing information in the alpha vault. While the skull itself was already desired, his use of it helped to make it even more popular. However, the skull was largely inaccessible to the masses: only 69 out of 10,000 NFTs had this trait.

Another stroke of genius by the 1337 Skulls team was the proliferation of the meme. The idea was, in my opinion, to make the rarest trait of the original collection the baseline for the 1337 Skulls collection. But this led to an interesting question: What happens when something of perceived value becomes commonplace?

On the surface, you may think that this would diminish the perceived value of the 1337 Skulls collection. Since there was a lot of crossover between the Chain Runners and 1337 Skulls communities, I was curious as to which PFP and individual would choose to represent themselves, even if they owned a “floor” Chain Runner. As a comparison, if a person had an entry level Chanel purse along with a knockoff of the most expensive Chanel purse, which item would they take to a very fancy and public outing?

Yet, many from the Chain Runners community abandoned their Runner avatar—the PFP from project that had provenance— and began adopting 1337 Skulls instead. Why? Beyond trying to artificially pump the project, I feel that this was because: (1) the 1337 Skulls delivered compelling art based on popular CC0 projects, and (2) they had a unique understanding of their audience.

The Artistic Cohesion and CC0 Integration of the 1337 Skulls Collection

I’d hazard to say that you will find few derivative projects that have more cohesive art than the 1337 Skulls. All the traits are visually pleasing and work well together. Even those traits that may appear off, such as the implementation of the Helga silhouette, were done on purpose. This degree of “ugliness” was included as an inside joke for the community of Chain Runners who have long celebrated this ill-favored form.

But while the different traits are often found in harmony, it’s important to note which traits the team chose to include in the project. The 1337 Skulls team created over 600 traits from over 40 CC0 projects, including Genesis Adventurers, OKPC, Flipmap, Tubby Cats, Cryptoadz, XCOPY and cryptodickbutts. However, the CC0 collection that received the most attention was Blitmap. This is not surprising as several Blitmap holders were listed as founders on the 1337 Skulls website, including flashrekt, Steve, 51991, emre, wrongnebula, and monmo. And while Blitmap traits have begun cropping up at different places online (you can reference my Nifty Newsletter for the Blitmap community for some examples), the Skulls brought awareness of the IP to an entirely new audience.

This seamless usage of CC0 traits, along with a rollout strategy that rewarded holders of various CC0 and on-chain projects with a free mint (more on this in a moment), proved to be the perfect storm for the project to catch fire.

While the art of the project was a critical element to the success of the 1337 Skulls, it worked hand-in-hand with the team’s deep understanding of the audience they were targeting. And the use of CC0 traits was just the beginning.

At the core, the Skulls community seems to be built on internet culture. While the Chain Runners positioned themselves as being cyberpunk and hackers, the Skulls positioned themselves as degens and denizens of the web. The very name of the project is a callout to leet speak, a particular syntax of writing that was made popular in the 80s and 90s. This use of language is a signal—you’re either one of us or an outsider—helping to forge bonds between people who “get it.”

The project is also an example of on-chain and CC0 maximalism. The latter is a topic of focus for founders Flashrekt and Dr. Scott Kominers who co-authored a piece for the a16z blog about why NFT creators are going CC0. NFTs have pushed the ideological conflict of open-versus-closed from being a matter of technology to that of art, and through CC0 the 1337 Skulls targeted a community built on openness. Beyond CC0, the 1337 Skulls also had implicit commentary on other hot topics in the NFT space, namely the rejection of a roadmap and the omission of royalties.

The team had a solid grip on who their audience was. While the NFTs may just look interesting to casual observers, they are a CC0 symphony dedicated to on-chain ideals for degens in the know.

Finally, it would be remiss of me not to mention the mechanics of the mint for the 1337 Skulls. The team took inspiration from the Tubby Cats, but instead of fumbling on the five-yard line, they went all the way to the end zone. Just like the Tubby Cats, the 1337 Skulls team zeroed in on projects that shared their ethos. Holders of CC0 and on-chain projects were often rewarded, either through raffles prior to mint day or through rapid-fire announcements on Twitter when a mint window was open.

The 1337 Skulls also learned from the Tubby Cats’ biggest mistake: not having a public sale. The original Tubby Cats collection was 20,000 pieces, and they opened wave after wave for projects. However, after about 14,000 pieces were minted, the Tubby Cats team announced a public sale. With the floor at around 0.4 to 0.6 Ethereum, the public sale was quickly bot-attacked, with one individual claiming over 80% of the remaining NFTs available! This caused the floor price to subsequently tank and many people to back away.(NOTE: While the sentiment is correct, I am going on my memory on this—if anyone wants to correct the numbers and provide Etherscan details, please DM me)

Conversely, the Skulls team took their allow list down to the wire. They opened wave after wave until all pieces were minted out. Sure, some folks (like myself) shifted CC0 assets across wallets to try to catch a few extra skulls at the mint, but this method largely succeeded in keeping the collection from being bot-attacked. This method is expected to be replicated in the future. Although while mitigating bot attacks, it does present the problem of NFT launches becoming a sort of like a “country club,” but that’s another topic for another time.

Looking Towards the Future

The question on many minds is this: will the 1337 Skulls continue to eclipse the floor price of the original Chain Runners NFT collection?

While the skulls peaked around 0.25 Ethereum and are currently sitting at 0.15 Ethereum (on January 10, 2023), the Chain Runners tumbled to right around 0.05 Ethereum on the heals of an announcement that the team would cease working on the project full time. This means that the derivative project is currently valued at 3x that of the original, something I think few would have expected when the 1337 Skulls launched almost a month ago. Whether the Skulls will keep this momentum in such a fickle space is anybody’s guess.

However, this begets a question I’m more interested in: what does this mean for potential derivative projects in the future? To me, the 1337 Skulls exposed what some could view as the potential and others as the weakness of CC0 projects: when the IP is in the public space, anyone can do anything with those assets.

To date, this has largely meant “love letters” to the original project, effectively fan art that can be commercialized. There has also been some low effort work designed to cash in on the popularity of the project. But prior to the 1337 Skulls, I can think of only one project that was a “commercial” success and high-effort, Flipmap. But that project never even got close to approaching the Blitmap floor, much less superseding it. (And yes, I know that in terms of the floor price and meeting expectations, Flipmap has not held up over this past year. My point is that it was a commercial project that was conceived with good intentions at extending the Blitmap universe.)

As far as I can tell, the 1337 Skulls was one of the first derivative projects to eclipse the floor of an original project. And rather than being built by a studio, it was created by a collection of folks who came together to “celebrate the very things that brought them together: CC0 pixel art and on-chain data,” according to their manifesto.

But what happens, however, when an executive at a major studio sees a CC0 NFT project and decides to launch a “derivative” that is anything but derivative? What if Adult Swim hijacked Goblintown? Or Trey Parker and Matt Stone turned MFers into a cartoon? What if HBO created a Loot (for Adventurers) series with Game of Thrones level of production? Or Activision made a Blitnaut game?

The mantra that “we are early” has prevented many from asking these questions, something that I think will change over the course of a few years. The question of whether an original project can withstand the headwinds of a more popular derivative will truly test the CC0 thesis. Buckle up anon.