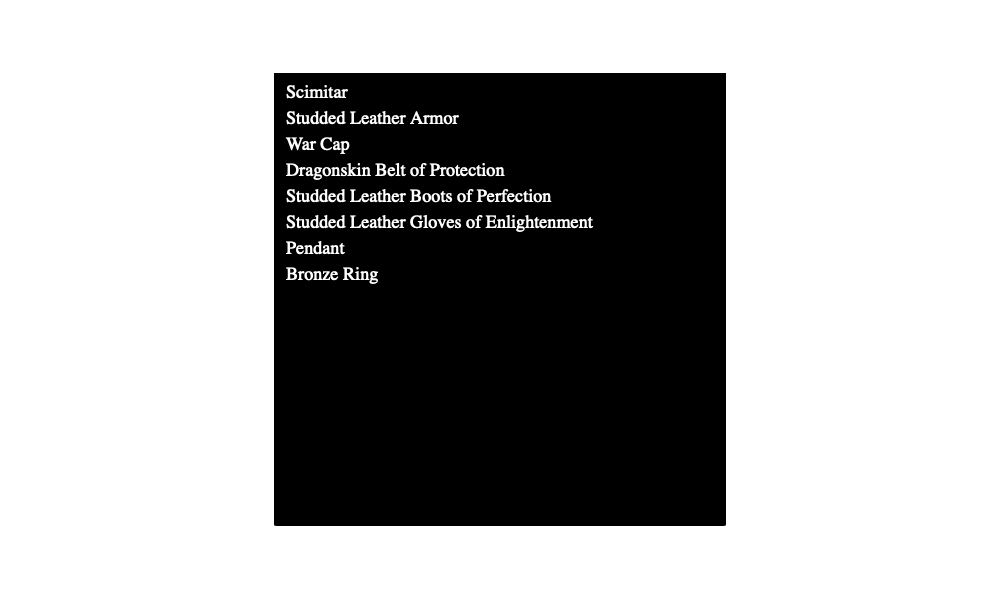 Little more than a week ago, the NFT and web3 world was rocked by Loot (for Adventurers), a project released by Dom Hofmann on a whim. While known in the web2 world as being the founder of Vine, Hofmann is one of the leading thinkers, builders and artists of web3. He is the creator of the on-chain project Blitmap (which I am a community member) and one of the ten founding members of Nouns. He’s also developing Sugar (Genesis), a game that none of us really know what it’s about but one that has seen insane sales, as well as the forthcoming gaming NFT SUP—both of which allegedly have ties into the Blitmap universe. And while all these projects are well known in the crypto/NFT world, it was Loot where Hofmann caught lightning in a bottle.

In a nutshell, Loot is 8,000 cards composed of a handful of text strings with qualities reminiscent of tabletop roll playing games (RPGs), such as Dungeons and Dragons (DnD). Simple in design, the NFT is white text on a black background. Nothing more, nothing less. And to make things interesting, Hofmann didn’t provide any “properties” or “details” to the card. So, it was rather hard, initially, to quickly search on the different keywords—this approach totally eschewed the notion of rarity that is so common with today’s avatar projects.

Loot was released on a tweet, and anyone could have minted this NFT for free (plus gas) directly from the contract. This was, in my opinion, a way for Hofmann to help not only battle bots quickly snapping up supply, but also to encourage the layperson to learn a little more about minting contracts. This is similar to how Owen Shen helps folks better understand the mechanics of the blockchain by encouraging 0xmons owners to go through the process of putting their data/image of their NFT monster on-chain. When you have to go through that process, it helps you appreciate a little more about what’s happening behind the scenes.

At any rate, I was able to hop on and mint a handful of Loot (for Adventurers) NFTs in spite of gas being fairly exorbitant at the time. Dom popped in the Blitmap Discord after seeing some folks minting like crazy and advised that it was just an experiment and not to go too hard. So, after getting my five, I stopped (possibly one of the dumbest things I’ve ever done in my life!)

And then it happened.

This free NFT began to catch fire like something I’ve never seen before. The mint wrapped up pretty quickly and you began to see Loot pop up on OpenSea for around 0.1 to 0.3 ETH. Interested collectors began picking them up while others began building tools on top of them to better understand what was in each of the bags.

Then guilds started organically forming, such as the Divine Robes, even though these items that weren’t inherently “rare.” This flipped the notion of rarity so commonly associated with profile pic projects (PFPs)—what is most uncommon is most rare/desired—on its head. Instead, this sort of desirability was community driven: Divine Robes became popular because the community said so, and, quite frankly, because a number of high profile NFT collectors opted into joining that guild. This will be a long lasting effect of Loot on future NFT projects.

This organic formation and definition of rarity/value was not happenstance, however, a purposeful stroke of genius by Hofmann. Because there was not an “easy” way to see the rarity of the particular bags on OpenSea or on a site like Rarity.Tools, the community was given the opportunity to breathe. And just like that time to breathe is important in bringing about the nuanced flavors of a fine wine, it certainly paid dividends with Loot.

With the popularity of the Divine Robes, there soon came a tool called Robes.Market for people to quickly ascertain the floor value of bags with that item in it. And with the rise of the robes, there was certain to be a yin to that yang—the Katanas quickly became the default bag of choice to rival the ordained. A tool was quickly forked from Robes.Market to help individuals locate bags with Katanas.

While all the guilds were forming, others saw opportunities to overlay more information to the universe of Loot (for Adventurers), often providing NFTs for free (or a minimum cost) to those holders of a Loot NFT. Ability Score was developed to help provided different qualities and levels around such things as strength and intelligence, Realms (for Adventurers) created fictional maps and Adventure Gold (AGLD), a currency of 10,000 tokens that could be claimed per Loot NFT, became the mother of all derivatives. The value of AGLD has been fluctuating between $4 and $6 (effectively a $40k to $60k gift on top of the Loot NFT!).

There were knock offs, rip offs, poorly executed projects and novel ideas that were being released faster than anyone could think. Most all of them were free or negligible cost, and the amount of FOMO caused gas prices to be outrageous throughout the entire network as Looters went to claim their spoils. In short, it was exhausting, thrilling and mind blowing.

Hofmann went on to release Synthetic Loot, a bag that is inherently associated with an Ethereum address and not an NFT to be minted, along with More Loot (mLoot) with a supply of one million NFTs that people could claim for free. While this impacted the Loot price in the short term, the long-term goal was apparent: cement Loot as a default protocol for other cool shit to be built on top of it.

As a good friend Elodis pointed out Loot, and the developers working on all these derivative projects, finally provided true utility of an NFT. This is not an airdrop of a dog, or the ability to purchase a shirt, or access to a party. Loot has fundamentally become a de facto protocol in the web3 world, spawning an informal App Store, if you will, across the entire NFT ecosystem. Plainly put: if you have a Loot (for Adventurers) NFT, you have an access card to get some particularly interesting cool shit, both now and down the road.

This is the lightning in the bottle that Hofmann someone managed to catch. Loot has become a sort of technological protocol for other pieces to be built upon. I’d love the chance to speak with him to see if it was intended or even dreamed of, but I’m sure that his DMs have been absolutely rekt—keep in mind he is also at work on three other projects and the immenent launch of Blitnauts while having a honeymoon on the horizon! However, what was created on a whim will go down as one of the monumental NFT creations of this cycle. The influence of this project has the potential to rival that of the Crypto Punks from years before. And while I am not a tabletop gamer and Loot doesn’t necessarily fit into what I’m interested in holding (I ended up selling four bags to secure another Blitmap and an Art Blocks Chromie Squiggle), I had to keep one bag in my reserve.

After all, this is going to be the project that will be remembered from 2021 many years down the line.